A few days ago we released version 0.1 of the smithay crate, its first release on crates.io. On this occasion, let me make a slightly detailed presentation of this wayland compositor library.

First of all, let me give some context of wayland, in order to show what problem smithay tries to solve. If you already know about this protocol, feel free to jump to next section.

The wayland protocol aims at replacing the X11 protocol as the standard communication mean between graphical client apps and the display server on linux. The rationale for this is that given how X11 is old, has accumulated a lot of debt over the years, and is full of security holes, it's better to just start over with a new protocol. The project has been going for a few years now and adoption is getting pretty good. Notably Gtk/Gnome and Qt/KDE are now almost fully compatible, and some linux distributions have started enabling it by default.

In a few points, here are the main difference between Wayland and X11:

This last point is core to Smithay's use: writing a full wayland server is a lot of work. There is the need to handle all the clients protocol-wise, do all the job of a window manager, but also manage the low-level resources with the kernel, initialize the framebuffers, retrieve and process the raw inputs, do the actual drawing and compositing, draw and manage the whole desktop user interface and so forth…

As such, while big projects like Gnome or KDE can afford doing all this in a very personal and customized way, smaller wayland compositors have started to rely on compositor libraries that do part of this job for you. Examples are libweston, wlroots, or the now mostly abandonned WLC.

Smithay is a compositor library written in Rust.

This first releases brings the most basic building blocks necessary to build a compositor. Smithay is designed in a modular bottom-up fashion: we currently have several independant low-level modules, each managing a very specific part of what "being a wayland compositor" requires. Smithay's user can then use these modules and configure them as they please to set up their compositor.

The backend modules are here to ease integration with the operating system. They abstract away the setup of the framebuffers, initialization of an OpenGL context to draw on, and retrieval of user inputs. Currently two backends exist:

All this together already allows the handling of several type of clients. For example, it is possible to run weston-terminal (a wayland terminal emulator provided by weston) in the smithay examples: 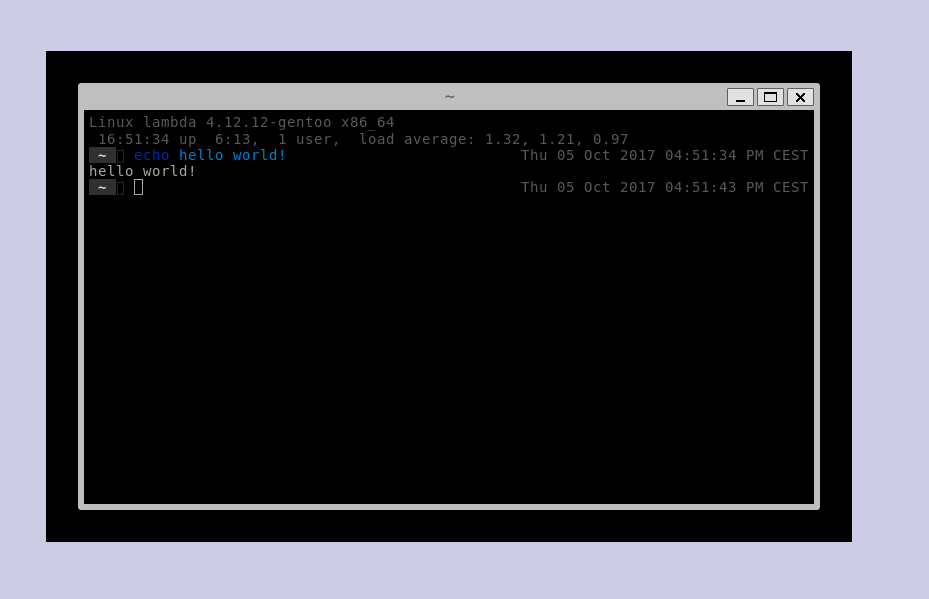 The black borders are a graphical artefact from smithay's example, that we just haven't got around fixing yet.

How can I run it?

If you want to play around with smithay and see what it can do, check out the examples in the github repository. A lot of code is still needed for a compositor built on smithay to work, and there is not nearly enough space in this blog post to paste the code.

You can also check out Smithay's documentation on docs.rs. The crate-level docs are minimalistic, but we try to expand on all the details in the documentation of the individual modules.

For the next steps, we plan to keep working on the fundamentals. Some of the most important remaining features are:

If you are interested, your contributions would be very welcome! Most of the work on the backends don't require any wayland knowledge. We've also started to work on a smithay book. For now it only contains explanations of the wayland protocol itself, but we plan to incorporate detailed tutorials on how to create wayland client apps using the wayland-client crate, and how to create wayland compositors using wayland-server and smithay.

We have a matrix chatroom @smithay:matrix.org, which is also bridged to mozilla's IRC at #smithay and to gitter at smithay/Lobby. Feel free to drop by!